Over 60 members and their cars arrived at The Boat House last Sunday to witness a display of such warm generosity by all who attended.

Besides being the day that we, as a Club, acknowledge the top three drivers in the annual championship competition, it was also about raising funds for Allen Graham’s Charity 4 Kidz.

Members arrived with toys in abundance and, amazingly we raised in cash, 1000 Euros for the Charity!! A truly wonderful achievement, which left the founder Allen, absolutely speechless.

A note from Charles Nutter, Charity organizer, read as follows:

I cannot begin to tell you, on behalf of the Allen Graham Charity, how grateful we are to your members for the amazing presents and astonishing donations totaling 1,000 euros which were made at the Boat House event.

The look on the children’s faces as they receive their presents is humbling.

Again thanks a million and Merry Christmas to all your members. They have made it a happy time for many children.
Best wishes
Charles
To all who attended and contributed a heart felt “Thank You” from all on the committee!
The Drivers Championship was again sponsored by Steve Bicknell, of Insurance Express in Palmanova, and our thanks once again for his company’s generous donation and support! The results are:
1st Paco Jimenez on 90 points who received the trophy and a voucher for 125 Euros.
2nd Pedro Alomar on 75 points who received a voucher for 75 Euros.
3rd yours truly Ray Dodd who received a voucher for 50 Euros.
The results this year were very close and could only be decided upon completion of the last event. In closing, it was  a wonderful way to end the year, which has been full of great events. A huge thank you to all that have contributed, either by planning a rally, or for ” the behind the scenes” organization. 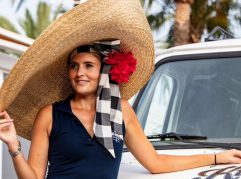