Members and guests assembled at  Festival Park . After the welcoming coffee and croissants supplied by Sue, they were sent off at one minute intervals to start the Easter Rally. The route, which was organized by Pam Gardner, and ably assisted by Stan, took us through Santa Maria, Bunyola, Esporles, Puigpunyent with a refreshment stop at “La Granja”. The route then continued through the back roads to Calvia, and finally to our last stop at the Son Muntaneer Golf Club. Here we had a delicious three course buffet after drinks on the terrace overlooking the fabulous course. The rally which was approx 75 Km and had several questions and in addition had several questions. The purpose of the event was to collect Easter Eggs along the way, which were carefully concealed. The only indication as to where they were, was a golden egg sign hanging from trees or railings. However, Pam had another devilish secret…. points  were awarded by the colour of the wrapping of the miniature eggs! 3 points for a golden egg, 2 points for purple and only 1 point for a chocolate coin. The results were extremely close but the overall winner of the event was H. P. & Karin Escher, in 2nd place was Peter & Elke Dinsing & 3rd Ray & Sue Dodd. Our thanks to Pam & Stan for organizing this event which was thoroughly enjoyed by over 50 members and guests. Looking forward to seeing you all at our next event on the  24th April. 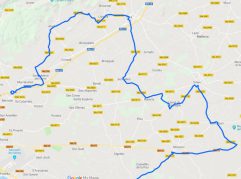 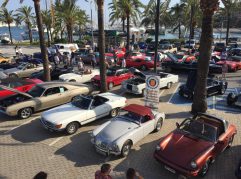 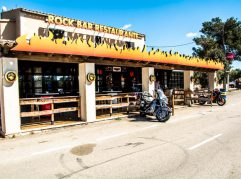