The opening drive out of the autumn season was organised by Lou Sutton and Nick Cutler. It was the first run that they have organised since becoming members a year ago and a great job they did of it!
We started from the car park at Es Cruce Restaurant near Manacor. There were 27 cars and 51 participants. As expected from Lou it was a tricky route to follow with questions along the way and scrabble tiles to find at set spots.

The route took us through some of the inner farmlands on roads we don’t often travel on the east of the island. There was not too much traffic and great views and quiet villages. It took concentration to follow the route and answer questions at the same time. We had to find 3 bags that had scrabble pieces in them to make up an unknown word.

On arrival at the restaurant there was an extra game where we were asked  to use our 7 scrabble pieces to make up the make of a car. Each tile had a different value as in the game of scrabble. Even this part wasn’t so easy especially if you hadn’t managed to find the bags!

The restaurant Foc i Caliu in Selva did a great job and is definitely one to be revisited.

The eventual winners were Nick Scantleberry and Jim Bell, closely followed in second by Pedro and Anne Alomar. In third place was Michael and Sabine Lobecke. 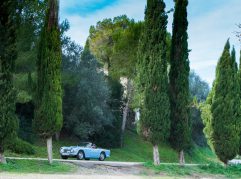