February´s rally was organised by Pam Gardner and Stan Hunter.
Thankfully, the weather was glorious without a cloud in the sky!

After a quick coffee, cars were given instructions and set off at 1 minute intervals.
The theme of the rally was Valentine´s as it fell in February. The idea was to follow the tulip route, picking up a different coloured pom pom at six different locations marked by a ¨KISS¨.

Nobody was aware of the value of the pom poms until the ¨Valentine´s Code ¨ was revealed in the restaurant. If they had chosen well, a maximum of 72 points were on offer. As it turned out, the orange ones were most valuable. Various easy questions were also asked to make sure people were paying attention. If answered correctly, another 13 points were available.

The route led us through Paguera, Capdella and over the top on the Ma 1016 and Ma 1043 country roads as used in the coming Oris Rally next month.

The winners with a grand total of 45 points were Nick Scantlebury and Jimbo in his orange Corvette. Close on their heels were Arthur and Dee in their Alpha with 43 points. Finally in third were Pedro and Ann with 42 points.

At 1pm we started to arrive at the picturesque restaurant of Mood Beach in Portals. We certainly attracted a crowd! Especially when Helen Pitt and Charles Nutter, who were on clean up duty as tail end Charlie, arrived with balloons streaming from the car. It certainly did look like they had just got married!

Many thanks to Moods who looked after us very well and Peo Stenberg for taking some stunning photos of us all. 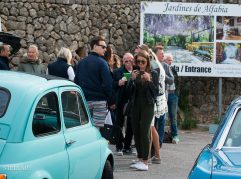